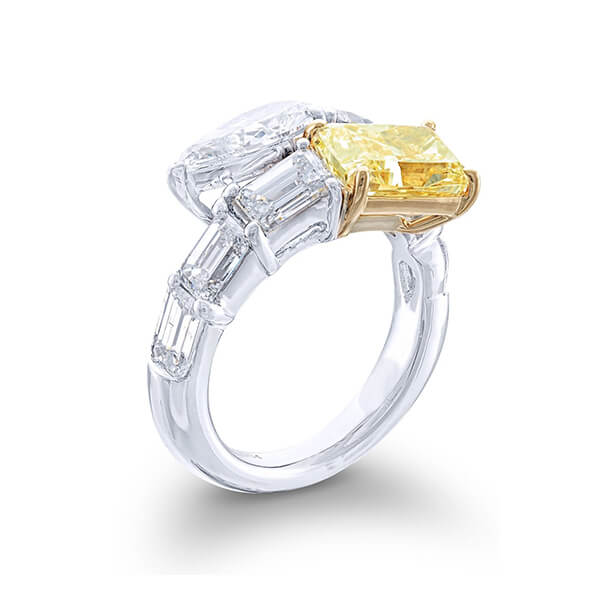 Two Stone Diamond Rings have seen an incredible revival, and the only question that should be asked is, what took so long? After all, what could be more romantic and symbolic of love than two stones side by side in harmony? Two Stone Rings are better known as Toi et Moi Rings, which translates to You & Me in French. They may be a new concept to many but in reality, they have a fascinating and long history that goes back centuries and are undeniably one of the most romantic ring designs to date. In this post, we’ll discuss the comeback of this design, buying tips, and different design options.

Whereas the most popular and dominant design style when it comes to multi-stone designs is that of the three stone diamond ring which is said to represent the past, present, and future, two stone diamonds focus on the connection between two souls. More often than not, the classic Toi et Moi design displays two of the stones equally side by side in a harmonious way. As a celebration of unity, two stone ring designs are often used for birthdays and anniversaries, but they are also making a comeback as the classic engagement rings they once were.

While it’s hard to pinpoint the exact time of its creation, its mention in history is made by none other than Napoleon Bonaparte in 1796, as a young soldier of 26 to his fiance Joséphine de Beauharnais. Their relationship was quite controversial. Joséphine was six years his elder, a widow, and a mother of two children from her previous marriage. But the heart wants what the heart wants, and this is Napoleon we’re speaking of, someone of legendary determination. The disapproval of his surroundings was of no interest to Napoleon, which led to a great love story that brought prominence to the design. While Napoleon and Joséphine’s marriage did not stand the test of time, Toi et Moi Rings, on the other hand, did and they owe it to the original antique Toi et Moi design.

While there are no limitations to the type of precious metals that should be used for two stone rings, the clear winners are all of the gold family. You will find that most designs implement, White, Yellow, and Rose Gold, which work tremendously well with these designs. Platinum is also a wonderful choice due to the elegance as well as strength of the metal itself.

Due to the antique appeal of most of its designs, Toi et Moi Rings work tremendously well with antique diamond cuts, from old mine cuts, to rose cuts. Other popular classic shapes include the Pear, Heart Shaped Diamond, Oval, and of course, Brilliant Round Cut.

New trends of using popular side stones for two stone rings have seen some remarkable and stunning results that work tremendously well. These include Half Moon, Trapezoids, Baguettes, Kites, and other unique cuts.

There is an astonishing amount of rich and remarkable design choices when it comes to Toi et Moi designs, due to the ample space and relative close proximity of one diamond to the other, there’s a lot ample room for creative ring styles. Below are some of our favorite ring design styles for two stone diamond rings.

While an open ring style fits the description of many other design styles, it is more often than not meant as a way to describe traditional circular rings with an opening at the front where two precious stones are situated at each opposing end. This works tremendously well as a way to showcase the companionship of each stone in a Toi et Moi style Ring, and is the most popular choice.

The Bypass ring style is perfect for two stone designs, both in its symbolism, and visual appeal. It is unique and eye-catching, while being minimalist and clean, and is achieved by twisting the usually straight lines of the ring band, and in a way bypassing one another. Bypass Rings originate from the Victorian Era, and much like two stone rings have made a massive comeback, and combining the two is a splendid idea.

Fans of vintage and antique styles are often drawn to filigree rings which is one of the most complex and intricate designs for rings, which requires talented and experienced artisans. They are recognizable by their delicate and fascinating ornamental patterns which are created by threading precious metals such as gold. The vintage nature of the Fillgree make for a great ring to support the classic two stone design.

The concept of Toi et Moi can be implemented in a variety of designs, from Cluster Rings, to Halo Two Stone Diamond Rings. But what makes the design completely unique is its ability to make brave combinations appear like a match made in heaven. Below are some of the most beloved combos.

Contrasting colors in jewelry is taken to the next level in two stone rings. One of the greatest way to achieve this is by matching up a classic diamond shape with a unique gemstone of rich, consistent color next to a white diamond. Below are some of the most sought after combinations of diamonds and colored gem stones in Toi et Moi rings.

Another symbolic implementation of the Two Stone Ring is matching a classic, often antique cut diamond with a similarly sized Ruby. While the diamond represents prosperity and devotion, the Ruby represents passion and devotion. Mixing the two does not only look incredibly stunning due to the contrast of the pure white diamond and the red of the Ruby but also has a wonderful meaning behind it.

A famous combo that goes beyond the scope of two stone diamonds. Combining the colorless diamond with an Emerald is a fantastic way to bring out the remarkable colors of the Emerald in a seamless fashion. Add to that the fact that the Emerald is May’s birthstone and you get an added symbolism that can prove relevant for multiple occasions.

More often than not involves a pear-cut diamond side by side with a pear-shaped blue sapphire that holds a charm to it that makes it hard to imagine anyone saying no to such an engagement proposal.

Often placed in a twist, or a bypass style ring, the seamless connection of two identical shapes is reminiscent of the classic three stone diamond ring combo, with a Toi et Moi touch. Popular options include antique cuts, as well as brilliant round cuts, pear cut diamonds, emeralds, and more.

A rising trend right now is using popular side stone shapes for Toi et Moi designs, such as two Half Moons, due to their ability to make a full circle symbolizing the two parts make a whole concept which is romantic in its own right.

A celebrity favorite, and justifiably so. Instead of debating which diamond cut to choose from, why not opt for both? This can be seen by the stunning Emily Ratajkowski who received a Toi et Moi ring showcasing a princess cut, and a larger pear-cut diamond side by side.

While diamonds have gained the upper hand when it comes to popularity, there was a time where pearls had that position, and considering the age of the Toi et Moi concept, it doesn’t come as a surprise that combining both simply works. Due to the Edwardian-like concept of this combination, implementing a similarly sized pearl next to an antique cut diamond works marvelously.

The contrast of the clean white cut diamond and a fancy color diamond of the same cut and size is a sight to behold. Examples such as a Canary Yellow Pear Cut situated next to a pure White Pear Cut of the same size is truly remarkable.