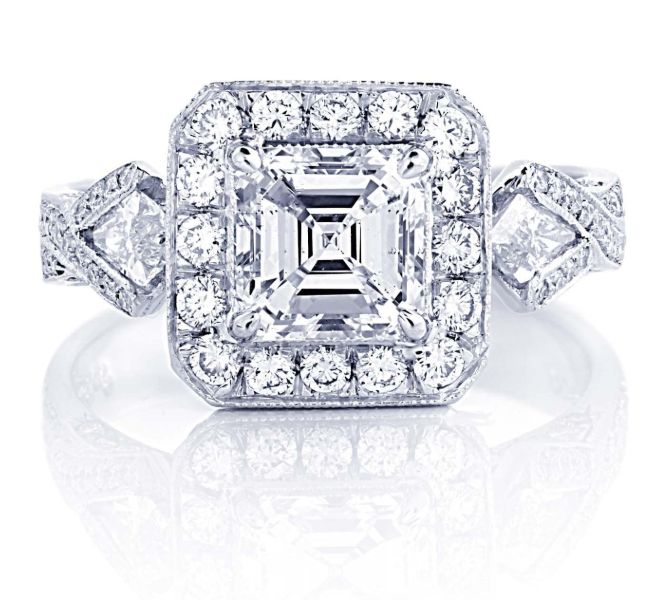 Edwardian Style Engagement Rings, as well as other Jewelry from that era, have seen a resurgence that is nothing short of spectacular, and it’s not hard to see why. Despite the Edwardian Era being quite short, spanning from 1900-1915 its historical significance remains noticed to this day, with the love for Art Deco.

In this guide, we will cover everything there is to know about the Edwardian Era and answer some of the questions surrounding both Art Deco and Edwardian Ring Styles. We will also go through some of the suitable diamond shapes that fit the style, ring settings and other design considerations to help you become more informed about everything that is Edwardian.

The Edwardian Era is based in British Monarchy and is considered to be the last of its kind from that geographical area when it comes to Jewelry. It was a short era, spanning only from 1901-1915, and was sadly, abruptly finished by World War 1. Like many eras, it got its name after the King at the time and area, being none other than King Edward VII, which was known for his charm and luxurious taste (and also being quite the playboy).

While the nature of King Edward was a problematic one, both to his family and his kingdom, to say the least, his charisma played a vital role in diplomatic efforts, and his visions for the future helped make the British army a forced to be reckoned with. His love for prestige and luxury brought forth one of the most magical eras of jewelry, which is, of course, the Edwardian style that is so beloved today, especially in engagement rings.

The Jewelry that was desired during the Edwardian era had two primary contributing factors. The first is the Belle Époque or Beautiful Age that was the French counterpart of its time. The second one is the love and appreciation for the art deco style and the influence of the art nouveau style of jewelry.. However, the Art Noveau was perhaps a little classless in the eyes of Edwardians, they sought some more elegant dominance thus the evolution of Edwardian Jewelry, combining both the feminine qualities of the Art Nouveau style and the luxury and status of traditional jewelry craftsmanship.

This is a common question, but truthfully the answer is both. There are two types of Edwardian, or Art Deco Engagement Rings. Misconceptions are quite common and may lead to disappointment so it’s best to have a clear understanding of the difference.

The true authentic antiques that span over a century. These are less common, and while they are incredibly beautiful, their pricing is well reflected in their age and rarity. Not often a realistic approach, plus some of the pieces are not well maintained.

The most popular and diverse option is taking the talent of modern artisans of recreating the motifs and designs, as well as diamond shapes and ring settings used during the Edwardian Jewelry at its peak. While it’s obviously true that the Edwardian Era has long passed us, talented artisans are able to recapture the charm in which its engagement rings were able to capture.

What Are Common Characteristics of Edwardian Style Engagement Rings and Jewelry?

The prevalent and perhaps most stunning factor in Edwardian Design is its use of floral, ornate designs that is hard to beat. Its flower-like structure in some designs in the past, lives on to this day as one of the most popular choices today, with an ample amount of accent diamonds and a classic diamond shape at the center. Other beloved designs include leaves and Milgrain based craftsmanship.

Filigree is one of the most fascinating and timeless romantic classics, showcasing true artistry with an intricate play on precious metal beads and threads. This unique style fits perfectly with the popular motifs of that era. This brings us to the next factor.

While nowadays, Edwardian Rings are also offered in Yellow gold, back in its hay day that was almost never seen. The precious metals that more accurately represent the time include Platinum, following advancement in metalworks cultivating it into jewelry became incredibly popular, and the results spoke for themselves. Silver or White Gold was also used at times.

Edwardian Ring Arrangement was quite innovative for their time showcasing what companies nowadays present as “invisible settings”. Multiple small diamonds set on thin and delicate precious metal, creating a sense of wholeness to the naked eye and appear to almost float as if magically on those wearing them. This combined with the filigree is incredibly powerful.

The Art Deco and Edwardian Periods captured a magical moment in history where advancements in technology allowed for some spectacular diamond shapes to be created, and yet at the same time old fashioned enough to maintain some of its tremendous charm. Below are some of the most recommended shapes that help maintain the authenticity and beauty that you’re looking for in Edwardian Engagement Rings.

Sharing many characteristics with the modern Round Cut, the Old European Cut Diamond even shares similar facets, being 57 or 58. Where they differ, however, is where the stunning style and personality of the Old Europea Cut comes into play. Whereas the modern Brilliant Round Cut seeks maximum fire and sparkle and attention to the outside view, the European Cut focused much more in the seduction of drawing you in with its unique play of colors. 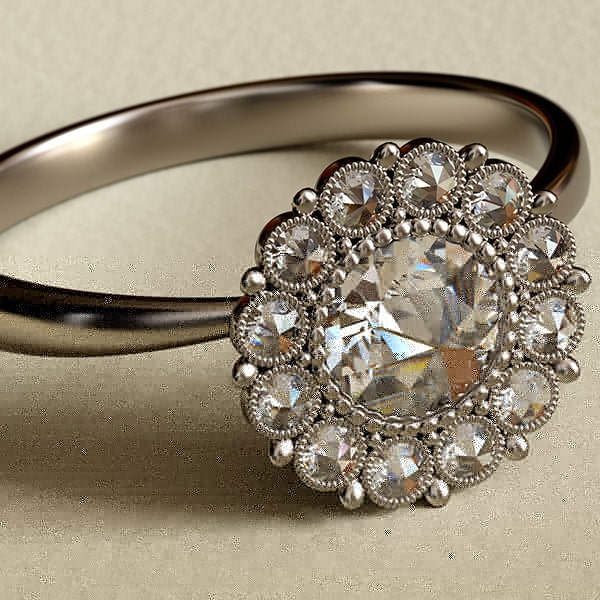 The Rose Cut Diamond is a fascinating cut that due to its dome-like top area, and simplistic triangular facet types, achieves a rose-like visual appeal that gives it a romantic, although more of a crystal cleanliness effect to it as opposed to the sheer brilliance sought by modern cuts. It is one of the predecessors of some of the modern cuts today and is another important part of the evolution that brought forth some of the most popular cuts today. Its elegance and rose petals appearance are an incredible combination that works splendidly with Edwardian Engagement Rings which already shares this motif on many occasions. 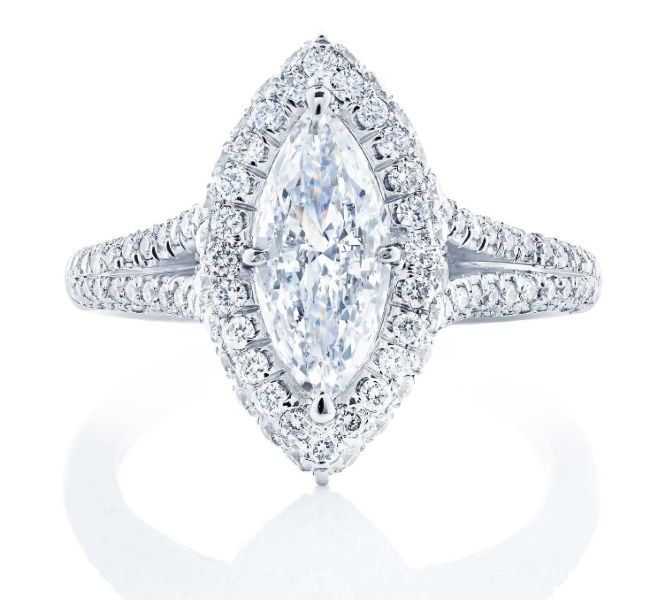 The rise of the Marquise Cut Diamond coincided with the Edwardian Jewelry movement and was certainly a strong presence in its use. The reasons for its popularity are quite clear upon a first glance, but are interesting nonetheless, as, like many other things in life, love was the ignition. The Marquise was created at the request of King Louis XV for his mistress, which was meant to represent the beauty and shape of her lips. But romance aside, the technical aspects of the Marquise Shape speak for themselves.

As a modification of sorts between the Oval and Pear Cuts, the Marquise also shares some of their greatest qualities. Allowing the wearer to enjoy their elongated beauty and charm, with a remarkable sparkle which works seamlessly with Edwardian Engagement Rings. 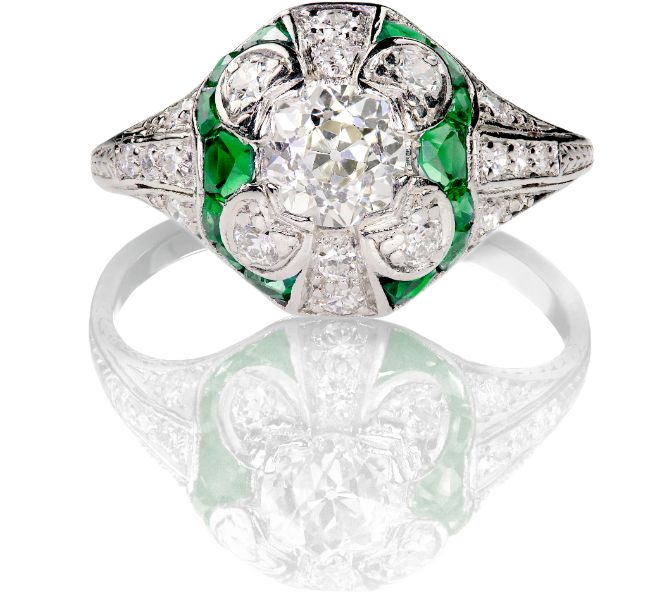 The predecessor of the modern rendition of the Cushion Cut, the Old Mine Cushion Cut Diamond was in its prime during the Edwardian Era and was one of its partners in success. Its charm stemmed partly with the pure artistry required to polish it by hand and the imperfection and uniqueness each piece carried. Noticeable differences between both versions appear when comparing the size of the facets, most notably the cutlet, table size, and other factors.

When comparing it to the modern cushion shape, it has a lot more subtle beauty to it, and while the relative lack of standards used to create them would never work on the modern version, the old mine cushion cut is able to pull it off in an incredibly romantic and vintage fashion that is a sight to behold.