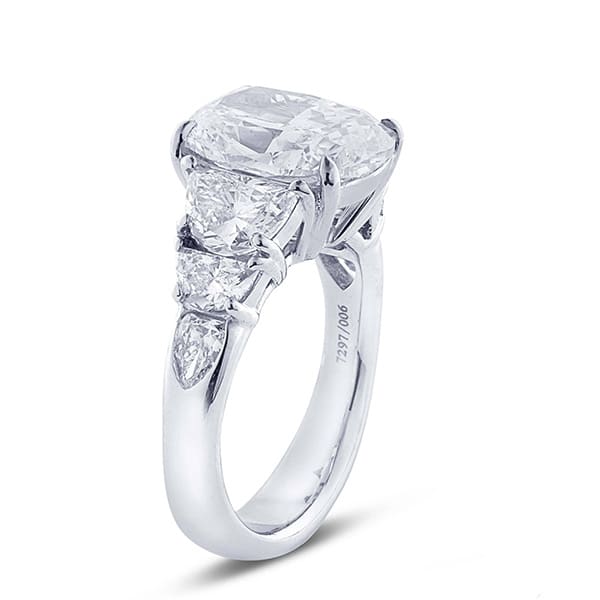 A continuation of our Emerald Guide to Three Stones, we felt that the Cushion deserves its praise and attention as well. After all, 3 Stone Cushion Cut Engagement Rings are an incredibly sought after option for Engagement Rings, but many questions are left unanswered.

In this guide, we’ll cover what makes the Cushion, otherwise known as a Pillow Cut Diamond so unique, and why it may or may not be the ideal choice for your needs.  We will also go over some of our favorite side stone combinations, and general buying tips for the Cushion Shape.

What Defines a Cushion Cut Diamond?

The cushion cut is quite unique in its structure. It is square, or sometimes rectangular depending on your preferences, yet has rounded corners which is largely how it got its name, as it Resembles a cushion or a pillow. During its evolution, the cushion, which once went by the name of old mine cut diamond, showcased 58 facets, whereas now, modern cushion cuts implement 64 facets for improved brilliance and sparkle.

The Cushion has two sought after looks that differ greatly from one another. The first being Chunky, which is the most popular version, often found in antique and vintage look designs that are so popular in three stone rings. It is called that because of its larger, or Chunkier patterns or facets and has a very distinct charm and is has a nice light return and visual spread.

The Second is the Crushed Ice pattern of facets which is more random in nature, much like you would see when crushing different pieces of ice, or broken glass The Crushed Ice Cushion Pattern carrying diamonds have their own beauty to them, and they are significantly cheaper compared to the chunky rendition. However, they are not an ideal choice because of a much poorer spread and light retention as well as other inconsistencies.

It’s also worth mentioning that there are hybrids of both cushion facet patterns, as well as facets with hearts and arrows patterns, which are also quite popular.

The Background and History of the Cushion Cut

The Cushion Diamond is not new by any means, as it spans over 200 years with some tremendous changes in its evolution until it has reached the Modern Brilliance known and loved today. While it has been taken over as the number one shape in terms of popularity by the Round Cut, there was a time when the Cushion Cut was the most sought-after and popular diamond shape in the world, especially during the Art Deco movement. In fact, you may have noticed the resurgence of the Antique Cushion Cut Diamond in antique-inspired engagement rings.

However, the Cushion Shape remains very popular to this day, much thanks to its unique structure and ability to act as the center stone diamond in vintage or art deco style three stone rings and other forms of jewelry. After all, when shopping for diamond jewelry, especially engagement rings or wedding rings, you’re looking for something that will stand the test of time. The cushion has been there and done that!

While not exclusive to Vintage and Antique Diamond Jewelry (the cushion works well with modern designs also) the Cushion is an amazing way to give a sense of nostalgia, and romance that is hard to beat, especially when it acts as a center stone. It is also significantly cheaper than the classic round cut, which despite having an advantage in terms of its sparkle, is so commonly used today that you might want to opt for something more unique that stands out from the pack.

While there are seemingly endless stunning combinations available with this type of design, most of which can be summarized by three categories, which are primarily different because of the difference in the size of the diamonds surrounding the center stone. While all of them are beautiful in their own way, what makes one ideal over another will be the relative comparison between them and the size of your center stone.

We simply had to include this match made in heaven as the first on our list. Pear Cuts, one could say, are a hybrid of the powerful and popular marquise and round shapes. They have some of the remarkable brilliance the round cut brings, and the sophistication of the marquise. When combined with a Cushion Cut Diamond at the center, they are often placed horizontally, and their elongated thin beauty acts as a majestic arrow or even arms that connect with the ring band seamlessly.

The half moon cut is an incredibly popular side stone option, and is available in both step, and brilliant cuts. With the Cushion being a brilliant cut and the power of the half moon, we find combining brilliant with brilliant the ideal option. The half moon is a universally beloved match with almost any center stone, with its Crescent shape, pointing towards the center stone from each opposing side, creating a sense of closure and completeness that is unrivalled and works especially well with the cushion.

While a trilogy of the same shape is sometimes a little boring, when it comes to the cushion and amount of variants it has, it is actually a very viable and exciting option. As side stones, especially when they are more square in nature, the cushions complement each other perfectly, acting as subtle shoulders that bring more attention to the center stone, their mother.

A creative option that combines both the brilliant and step cut in a stunning fashion. The tapered baguette which is a modified version of the classic baguette cut (step cut) is placed horizontally, and with its elongated thin appearance connects the encirclement on the center ring in a remarkable vintage fashion. Its subtlety both puts extra attention towards the stunning brilliance of the cushion at the center, as well as adds a unique flair to the ring band itself.